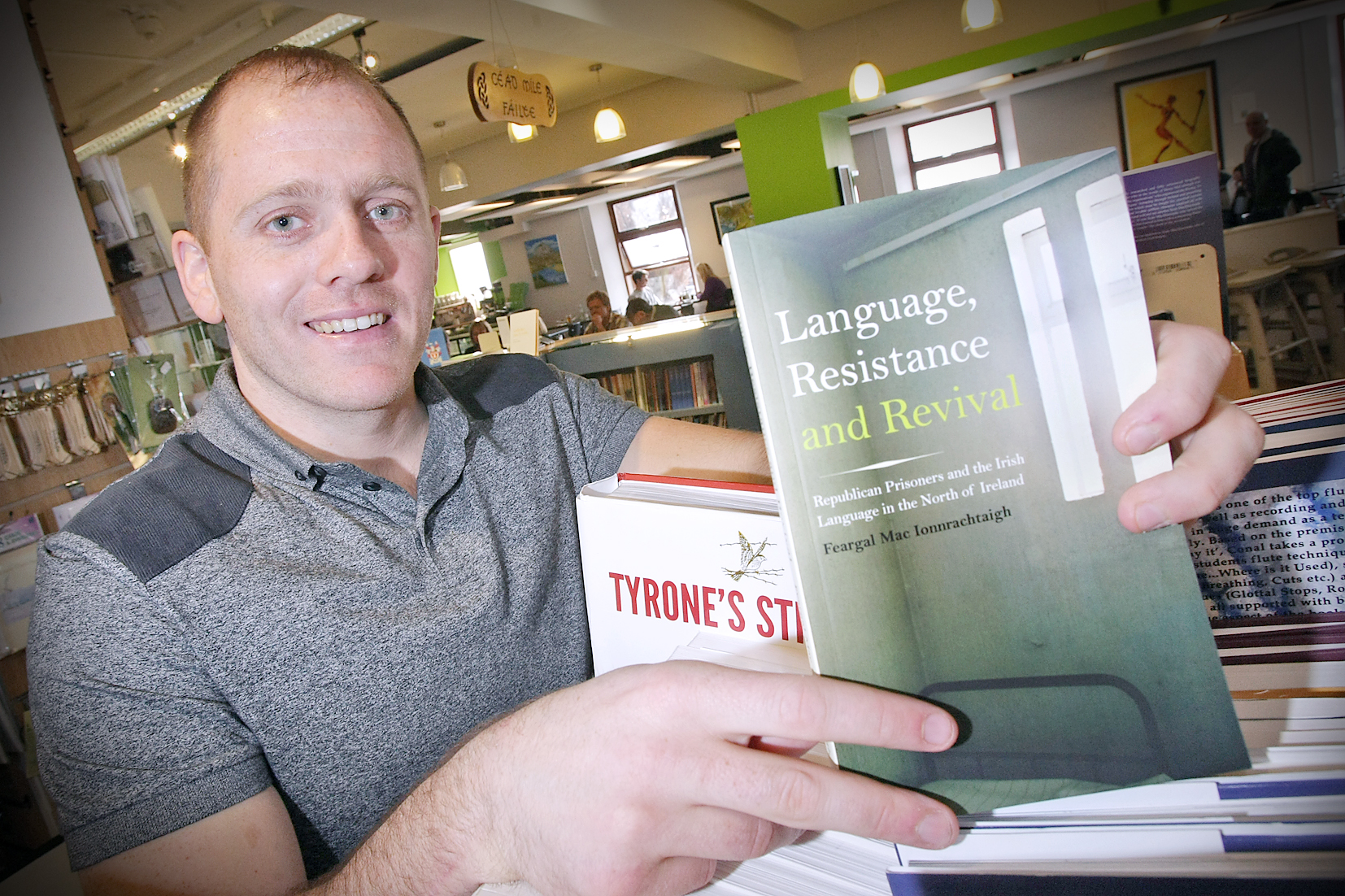 Interview with Feargal Mac Ionnrachtaigh on ‘Language, Resistance and Revival’ 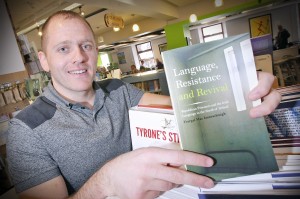 Ciarán Dunbar interviews Feargal Mac Ionnrachtaigh for An Tuairisceoir about his new book:

Tell us how this project began and how long you are working on it?

I started this project for the first time as an MA thesis in Queens University Belfast back in 2004 and then continued it as doctoral research between 2005 and 2009. I succeeded in getting a contract from international political publishers Pluto Press in 2011 and it took this long to reach fruition.

Why did you write the book in English?

I realised from the outset that this was a story that could engage an international audience and go much further and wider that a fluent Irish language readership, while offering significant historical, political, sociological and sociolinguistic lessons. It was for this reason that Pluto press accepted my proposal as their first ever book that deals with the Irish language.

In addition, not all of those who took part in this critical phase of our history, including those interviewed, had fluent written and spoken Irish. Even though many of them had been central to many great achievements in the community revival including setting up schools and community projects, they hadn’t, for one reason or another, retained complete spoken fluency. That said, the majority of the interviews in the book are in Irish with English translations underneath. The activists and narrators were given a choice and I suggested that they used the language in which they felt most comfortable expressing themselves in order that they could give an accurate account from memory.

I think it’s crucial that our story is told on an international scale and unfortunately, and for reasons explained in detail in the book, the English language has garnered such as a status for itself on an international stage because of the colonial and imperial processes imposed by British power on a global scale. Again, I think its essential that an Irish language version of this story is available and provided for. I intend, to prepare a more accessible version of this story in Irish for primary and secondary school pupils.

Why was it important that republican prisoners spoke Irish?

Initially, it is an interesting issue that is closely intertwined with the turbulent history of Ireland and with the history of the revival itself. The tradition of Irish language learning amongst republican prisoners goes back to Frongoch in 1917 after the Easter Rising; and it is apparent again on the prison ships Argenta and Al Rawdah in the twenties and forties; and again in Crumlin Road jail and the Curragh in the Forties with people such as Máirtín Ó Cadhain playing a central role; and again in the fifties with various activists, right up to the Long Kesh era.

This happened for various reasons; a way of mental release in the context of persecution and loneliness, an means of struggle against the system, for cultural reasons, through ideological and political inspiration around which the culture and tradition grew. This book examines this tradition comprehensively. I took a particular interest in this issue however as I understood that the Long Kesh struggle played a transformativd role in the contemporary revival into which I became involved as a student of Bunscoil Phobal Feirste in the mid-eighties and as an activist after that.

Although former prisoners who were fluent Irish speakers played an active role in every period in the twentieth century when they were released from captivity, I realized that the Long Kesh prison struggle had a remarkable influence on the community based revival that exploded after the hunger strikes and which was different in many ways. Firstly, there was a tumultuous political context during the hunger strikes when the nationalist community were inspired in a deeply emotive way about issues of identity that was not present since the Easter Rising, but more importantly still, because the Shaws Road Gaeltacht pioneers had laid down solid foundations that activists could build on. They both adhered and followed the Gaeltacht motto, ‘Na hAbair é, déan é’, and due to their great work, remarkable progress ensued.

What influence do these speakers have on the Irish speaking community in the north today?

These activists are fully involved in the community throughout the six counties and further afield who are working on a multitude of Irish language projects and playing a positive role in attempts to revive the language.

Certain people would say of course that republican’s interest in Irish had a detrimental effect on the language and that they should just speak English, what is your opinion on that?

To be honest, I think that there is a certain amount of arrogance and fascism connected with the view that certain groups of people shouldn’t speak Irish for fear they may damage it. No one group, community or class has exclusive ownership of the language and people have a right learn and promote the language for whatever reasons that motivate them personally. Be that cultural, linguistic, political, ideological or spiritual motivation; these reasons are legitimate for the person who has been inspired be them..

If some person or group is offended in some way because certain people with certain opinions are speaking Irish, then it is quite clear that they are the ones with the problem regarding their perception and general attitude to fairness. I think this narrow view opinion stems from the classic excuse used by political unionism and a succession of British governments, who, in certain periods, and continually display blatant intransigence and discriminatory practices when dealing with the Irish speaking community. It is these same forces who played a primary role in the historical decline of the language for their own selfish cultural, political, and socio-economic reasons even before any ‘republican’ became interested in the language, that impose this hypocritical notion upon us.

So, a lot of prisoners did not bother learning the Irish language – why was that, in your opinion?

Why doesn’t everybody in Ireland learn the language? I think that is a very general and wide ranging question. Republican prisoners can’t be taken as one homogenous group or ‘unit’. Often it boils down to there being various age groups, organisations, classes and ideologies as well as people from different areas, both urban and rural etc. Different people have different motivations based on the political context in which find themselves. I feel that the language was at its strongest point in the prisons during the Blanketmen Protest in Long Kesh due to the incredibly harsh and brutal conditions the prisoners had to endure 24 hours a day. In this scenario, the language functioned as a very powerful instrument of struggle and identity.

Will you be writing any other books in future?

I intend to prepare an Irish language version of the book but have no current plans apart from organising an active book tour throughout Ireland and further afield. I have been invited to America at the end of April for a series of launches in New York and Boston where there is great interest in the Irish language and Irish history.

If any groups or activists are interested in organising a launch in their own area, please contact me on eolas@feargalmac.org or phone 07841101630. More information:
http://www.feargalmac.org/events/

Sadly your father, Terry Snr. passed away recently and your brother Terry Óg was murdered in 1998, so as well as it being a great day for you with the launch of the book, it will be tinged with sadness as your brother and father won’t be there – how have they influenced you?

It will be sad, certainly. My eldest brother Terry was murdered when I was studying for my A Levels in Coláiste Feirste. He was an inspirational and energetic person, who worked tirelessly on behalf of his own community, especially with young people and who made an impression on everyone who met him. Terry’s memory continually inspires me and gives me courage while this book was written in tribute to him.

As well as that, as you mentioned, my father passed away before Christmas after a short illness. He was a former republican prisoner who learnt Irish in Long Kesh continued to have a great interest in the language thereafter. He took the opportunity to send me to an Irish language primary school and he inspired me as an Irish language activist since then. He contributed to the book along with 45 others who I interviewed and it is a source of personal sadness to me that won’t be there to celebrate this night with me. There are three others I interviewed who are sadly no longer with us, Willie John McCorry, Eddie Keenan and Billy Kelly.

That said, he was alive to see me finish the book and proud that I achieved the vision that I first envisaged when starting on this endeavour many years ago. He was a well-known community activist in West Belfast who devoted his life to helping the community, and that is how he will be remembered. I remember him of course as my father and dear friend who will stay with me in my heart, forever. He and my brother Terry óg are both heroes of mine and this book would certainly not have been written without their encouragement. They were two Giants of men who I miss and to whom I will be eternally grateful.

The Belfast Launch of ‘Language, Revival and Resistance’ will take place in Coláiste Feirste this Thursday, 18 April at 7.30pm. Music, Wine and Nibbles will be provided on the night where the Phil Scraton and Jake Mac Siacais will launch the book.

Jake is from Belfast and was sentenced to the Cages of Long Kesh from 1975 to 1977 where he learned the Irish language. Shortly after his release, he was re-arrested and sentenced to the H-Blocks of Long Kesh where he was imprisoned from 1977 to 1982. During this period he played a central role in Irish language development in the prison. Following his release, he has been very active in Irish language and community development in Belfast for the past thirty years. He worked as a sub-editor with the Andersonstown News and LÁ newspapers before taking up his current post as Director of Belfast Irish language Development Agency, Forbairt Feirste, which is centrally involved in the development of the Gaeltacht quarter in West Belfast.

Phil Scraton originally from Liverpool and began his forty year career in research working with full-time with its Irish Traveller community. He is a Professor of Criminology in the Institute of Criminology and Criminal Justice, School of Law, Queen’s University, Belfast. He is world renowned academic activist and has published widely on: prisons and imprisonment, the regulation and criminalisation of children and young people; controversial deaths and the state; the rights of the bereaved and survivors in the aftermath of disasters; the politics of truth and official inquiry. These include Hillsborough: The Truth (Mainstream, 2000), and Beyond September 11: An Anthology of Dissent (Pluto, 2002). His latest books are Power, Conflict and Criminalisation, Routledge (2007), The Violence of Incarceration, Routledge (2009, ed. with Jude McCulloch), Hillsborough: The Truth, Mainstream, (2009, 3rd Edn) and The Incarceration of Women, Palgrave Macmillan, (forthcoming with Linda Moore). He is co-author of The Hurt Inside: The Imprisonment of Women and Girls in Northern Ireland (Northern Ireland Human Rights Commission, 2005), The Prison Within (Northern Ireland Human Rights Commission, 2007). He also led the research of the Hillsborough Independent Panel, and was primary author of its Report published in September 2012 to universal acclaim.

Ciarán Dunbar interviews Feargal Mac Ionnrachtaigh for An Tuairisceoir about his new book: 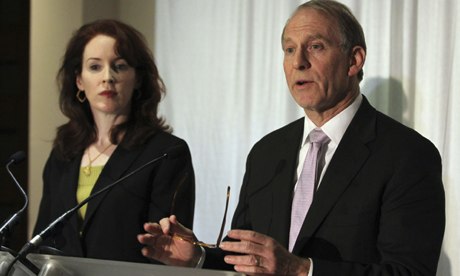